From Friday 27 January to Saturday 25 February

Open from Friday 27 January and runs until Saturday 25 February. Launching on Friday 3rd February at 6pm with Artist’s Talk. All welcome.

As a result of the war, contemporary artist Yevhen Svitlychnyi was forced to flee Ukraine for Ballyvaughan and the magical Burren.

In Ukrainian, painting is called obrazotvorche mystetstvo, literally the art of creating images. In the works presented in this exhibition, the images of the unspeakable tragedy of the war are created through the prism of thousands of years of biblical history, and culture: war – death – life – image – myth.  The first part of the cycle The Burren – Ukrainian Chronicles: 2022 was created and exhibited at Burren College of Art whilst part II was hosted by The Courthouse gallery in Ennistymon. glór now presents part III of the cycle.

Everything that I have felt and absorbed since I arrived in Ireland, I have captured in these images, and with their visible and hidden meanings, viewers will create their own secret, their own myth.’   Yevhen Svitlychnyi

As a result of the war, like so many of my compatriots I was forced to flee Ukraine, and by the fortunate intervention of my friends I arrived in Ireland, into the warm and welcoming embrace of Ireland and its people. I travelled to Ballyvaughan, in this magical place that is The Burren, and was introduced to the wonderful people at the Burren College of Art who have been so welcoming, generous and supportive of my work. The first part of the cycle “The Burren – Ukrainian Chronicles: 2022” was created and exhibited at Burren College of Art in July. Our collaboration continues as well as the creation of the artistic chronicles of the war.
The next part of the cycle “The Burren – Ukrainian Chronicles. Part II» was hosted by Courthouse gallery in Ennistymon in December.
Thanks to the gallery glor now I am presenting the third part of the cycle “The Burren- Ukrainian Chronicles. Part III”.

Throughout Ukraine – in Kyiv, in my beloved city of Kharkiv and everywhere else – the bombing is merciless and relentless. The courage, fearlessness and resilience of the Ukrainian people defending their country, as well as the horrors of the bloody, brutal, senseless war is being documented every day. It is just bare facts for now.
Our Victory will create a Ukrainian myth – a heroic, tragic, modern myth based on those facts.
In Ukrainian, painting is called “obrazotvorche mystetstvo”, literally the art of creating images. In the works presented in this Exhibition, the images of the unspeakable tragedy of the war are created through the prism of thousands years of biblical history, and culture: war – death – life – image – myth.
The mystery of the origin of these images lies in specific events being repeated over and over again, forming a myth, becoming a product which reveals its essence, its mysterious meanings.

Yevhen Svitlychnyi (Alternate roman translation “Yevgen Svitlychny” / “Eugene Svitlychny” Ukrainian: Світли́чний Євге́н Іва́нович; born June 1, 1948, in Kaunas, Lithuanian SSR) is a contemporary Ukrainian artist.
Svitlychnyi was graduated from the Kyiv Art Institute in 1973 (Departments of Painting), where he studied teachers and mentors, K. Trokhymenko and A. Plamenitsky. From 1974 he lives and works in Kharkiv. For the last 20 years he has been teaching at the Department of Fine and Decorative Arts of the Faculty of Architecture of Kharkiv National University of Civil Engineering and Architecture.
Since 1980 he is and has always been an active participant in international and national exhibitions. Svitlychnyi’s first personal exhibition took place in Kyiv in 1986. The first publication of his works was in the dissident’s so-called “samvydaw” magazine “Kafedra” Part 9, 1989. He has had 23 solo and joint exhibitions to date, and has been an artist-in-residence at Burren College of Art since April, 2022.
Svitlychnyi’s work is held in the following permanent collections:
• National Art Museum of Ukraine (Kyiv, Ukraine)
• Norton and Nancy Dodge Collection of Soviet Nonconformist Art
• Zimmerli Art Museum at Rutgers University (New Brunswick, the USA)
• Kharkiv Art Museum (Kharkiv, Ukraine)
Svitlychnyi’s work is also held in many private collections in USA, Portuguese, Germany, Israel, Spain, Bolivia, Canada and Ukraine.

Yevhen Svitlychnyi is married to Yevheniia Svitlychna. Yevhenia Svitlychna is a philologist, a specialist in classical philology and the author of over 80 scientific papers. They have three sons: Borys Svitlychny – military, Oleksandr Svitlychny – MD (surgeon), Ivan Svitlychny – an artist, the main direction of his work is new media. Ivan also works with video, sound – sculpture, graphics, installations. 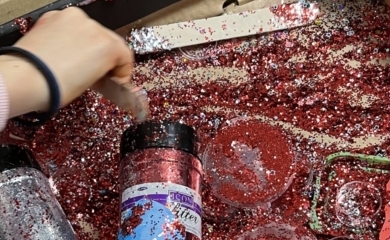