From Thursday 08 July to Friday 20 August

An exhibition with Martha Cashman, Annita McKee and Insaf Yalcinkaya.

Sintering is the process of fusing powder-based materials into a solid state through a reaction to high temperature. In clay work, sintering is when particles stick together permanently, and the work is considered fully fired.

Sinterella is a group exhibition produced to explore the idea of telling stories through material. Each artist chooses her material as a method to express a narrative. The process of the works’ creation is often regarded as phases or drafts for a finished piece, but in Sinterella, we look at the creative process as a paragraph that lives on as an integral part of the entire story.

Cashman and McKee’s projects respond to useful household objects and use the clay to explore the pebbles to tell different stories, perhaps less utilitarian, about our life and our history. By taking the objects out of their original contexts, both artists offer brand new narratives for us to think about when seeing a chair, or a spoon. It is an opportunity to reconsider the potential in everything that surrounds us.

Yalcinkaya uses plaster, a material “cousin” of clay, to connect a Kurdish mythological narrative to her life in Ireland. The piece will progress throughout the exhibition period to offer engagement with the artist’s writing about the visual artwork, and her journey to Ireland, including a consideration of the chosen materials.

Martha Cashman is a Cork-based artist who works primarily in paper porcelain. She traps seeds on the surface of the clay to create surface decoration and adds driftwood. She mainly works with thin pieces of clay to build her sculptural work, which is high fired to 1280 degrees thus giving the pureness to the porcelain that allows the light to shine through the pieces, this brings the clay back to life again.

Her Tool collection began as a dedication to the elders in her life. The porcelain pieces respond to the symbolism and cultural significance behind the spoon that is a tool for nourishment and is also often used as a power tool held in the drawer in the kitchen, or a threat if one steps out of line. Recurring memories of her Grandmother and her role in the home resonate deeply with the artist’s practice. She began sculpting a series of porcelain spoons based on memory and narrative on the play between beauty and trauma, realism, and abstraction.

Annita McKee creates slip cast ceramic sculptures inspired by her experience diving and exploring the ocean and its shores. Her pieces are often hand-built chairs and slip casts of found pebbles that are selected according to their physical properties and emotional response they may bring. These sculptures suggest the trace of people on an emotional journey.

The artist takes her sculptures underwater to photograph. It is here, away from outside realities that psychological scenarios are considered. Sometimes a physical separation, a removal from any given situation is necessary to see clearer, to feel more or less. The emoting chair forces us to stop and think – considering a mental state. Chairs beneath the ocean’s surface promote freedom to explore feelings whilst the inhabitants interact.
The artist considers the physical qualities of pure white porcelain as a representation of human beings’ fragility, providing a blank canvas for individuals to form opinions and responses in their own world.

Insaf Yalcinkaya is a Kurdish poet born in Dersim in the Turkish part of Kurdistan. After a Bachelor degree she taught in Primary and Secondary schools. She was a political activist, and also a Political Consultancy Advisor and has recognised refugee status in Ireland. She has also shown ceramics in several art exhibitions. Insaf’s articles have been published in national and local magazines and newspapers in Turkey, and her poetry published in Correspondences: an anthology by Stinging Fly, the MASI Journal and in Flare 14 and Flare 15 by Dublin’s Sunflowers Session.

This painting – entitled Shamaran – is made from wood, pinecones and plasterwork. Shahmaran comes from Kurdish words “Shah”, which means wise leader, and “Mar” which means snake. This is a legend of the Kurds, which comes from Mesopotamia. The story of Shahmaran is told the most in Mardin city in the south-east Anatolian region of Turkey. A lot of souvenirs and portraits are made in Mardin and are related to this mother Goddess of the Kurds. In prehistory, Shahmaran lived in a heaven in the sky then she was obliged to move underground due to the people’s betrayal, where she founded a new heaven. She knows all the secrets of the universe about the past and the future. 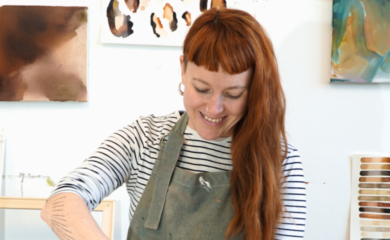 glór in association with Bealtaine: Foraging for Bio-Colour – A Workshop with Kari Cahill